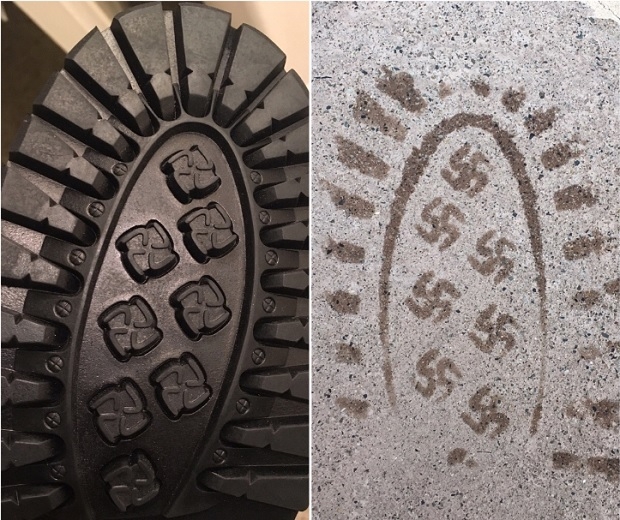 “This ancient symbol is revered by millions worldwide,” said Upendra Singh, Raelian Guide and director of the alliance formed to restore the swastika’s pre-Nazi era meaning of good will.

“Conal yielded to biased, ignorant complaints after a customer found swastika decoration on the soles of a Conal boots,” Singh said. “According to Daily Mail Online on January 11, that person shared a photo of the boot on the social media site Reddit.
Conan then announced it would recall the boots and apologized for what it called ‘the offensive symbol,’ saying it’s a “design-flaw emanating from China.”

“But some comments on Reddit point to the truth about the swastika,” Singh added, giving examples:

Connect_the-Bots: “[The swastika] is a symbol of good luck for most people that know it. It was briefly hijacked as a symbol of political supremacy in one corner of the world. Isn't it time to give the swastika back its original meaning?”

Mr. Jekyll: “Sell the boots in India or for that matter much of east Asia, where the swastika is considered a lucky symbol.”

Justmehakim: “Actually a swastika stands for good luck and peace.”

“Conal went into fear-based reaction mode, insulting the millions who revere this symbol,” Singh said. “It’s been a religious and traditional symbol of peace and well-being for millennia. In its pre-Nazi era use, it was never antisemitic or hateful. Pre-1930s swastikas can be found in Jewish synagogues and other religious buildings and on cultural artifacts worldwide. Disgracing the swastika is a hurtful, religious insult to the millions worldwide who still use it as a religious symbol. One billion Hindus, 500 million Buddhists as well as hundreds of thousands of Raelians are some who revere this symbol.”

“We’re sure Conal International wouldn’t recall any of its products and apologize to its customers if crosses were displayed on them. Nor would they call it a ‘design-flaw,’ even though horrific events were perpetrated worldwide under the cross symbol against many indigenous populations. Accordingly, the swastika’s reputation should no longer be unjustly tarnished by the fact that Hitler misused it.”
Back to category overview   Back to news overview
Older News
Newer News